Its Time for the 2013 Presidential Inauguration 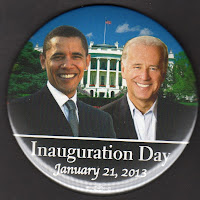 The American people have spoken; an African-American has been reelected to a second term as President of the United States. What a historic event! Besides the ruffles, flourishes, and regalia, the President (as well as the Nation) faces some difficult challenges.
[Namely] Immigration, the domestic economy, fiscal deficit reduction, and GUN Safety. January 20th is also the celebration date of the birth of Dr. Martin Luther King. So lets join in with Barack Obama, Joseph Biden, Mrs. Obama and Mrs. [Dr.] Biden along with the American people to celebrate this momentous occasion at the National Mall of Washington, D.C.

Strike Up the Band

No inauguration would be complete with Military Bands. The main reason that I bring this up is because the BIG sounds of the drums, trumpets, and other instruments drown out the noise within our own heads. You know the sounds...those of politics, partisanship, and polarization. Monday, January 21st should be a day of celebration of American democracy at its best. Then, on Tuesday, we can return to politics-as-usual.

To hear more about my musings (++music) about the 2013 Obama [2nd term] inauguration, follow this link...

Posted by EncouragementGuy! at 8:44 PM

I am sorry. While I respect the office I do not respect the men and I really get sick and tired of this 'monarchy' approach to this office. Yes it is a privilege to be President of this country - I which the 'privilege' attitude was present.